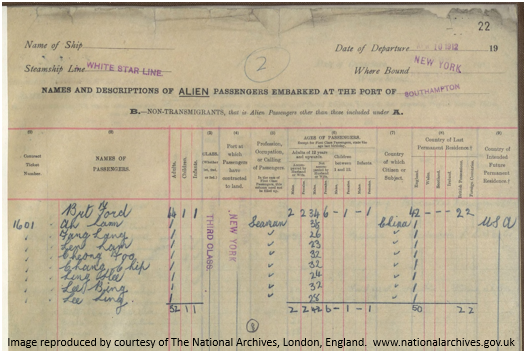 Various accounts mention that Chinese men escaped on lifeboats. Fang Wing Lung was found clinging to a table, and was among the last passengers to be saved from the freezing ocean. According to James Cameron, his rescue was the inspiration for how Rose was saved in the 1997 film “Titanic.”

When they arrived in New York with the other survivors, the six were met with suspicion and slander instead of compassion. They were not allowed to disembark in the United States because of the Chinese Exclusion Act, and were expelled from the country.

Issues with how names were registered challenged historians who wanted to learn more about these men and their fate. Their story, hidden for over a century, is being told in the documentary “The Six.” The movie, directed by Arthur Jones, had its North American premiere at Vancouver International Film Festival in 2021.

How would you treat these men if you met them?