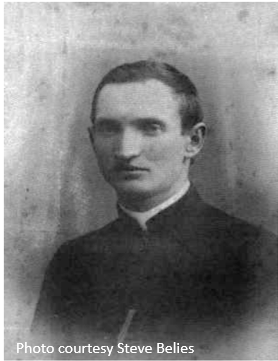 Father Juozas Montvila was a Lithuanian priest who planned to emigrate to the USA after he angered the Russian regime and they stopped him from preaching. Second Class passenger Ellen Toomey told reporters that he, Father Peruschitz, and Father Byles said Mass every day after the iceberg collision, consoling passengers and refusing to board lifeboats.

Lawrence Beesley recorded the following observations of passengers in the Second Class library:

“In the middle of the room are two Catholic priests, one quietly reading-either English or Irish, and probably the latter-the other, dark, bearded, with a broad-brimmed hat, talking earnestly to a friend in German and evidently explaining some verse in the open Bible before him...’”

According to reports, the "...young Lithuanian priest Juozas Montvila served his calling to the very end" by refusing a place on one of the ship's lifeboats, choosing to administer his priestly duties and offering solace to his fellow travelers.

Considered a hero in Lithuania, Montvila was under consideration for canonization (sainthood) by the Catholic church with the ship’s other priests, Byles and Peruschitz, according to 2015 BBC reports.

Father Montvila was considered a hero in Lithuania.